Very early Tuesday morning October 29th, 2019 in Pollock, near Lufkin on Highway 69 an 18-wheeler crash slowed traffic to a standstill. The crash resulted in a diesel spill, and clean up crews were called in. The wreck has been completely cleared at this time.

ALERT: A crash on US 69 North near FM 843 in Pollok has resulted in an overturned 18-wheeler and a diesel spill. Northbound lanes, the turn lane and the inside southbound lane are closed at this time. Prepare for delays as this scene clears. Motorists should reduce speed through the area and stay alert for emergency personnel. Obey all traffic control in place.

ANGELINA COUNTY, Texas (KTRE) - Emergency crews are on the scene of an 18-wheeler crash on U.S. Highway 69, north of Lufkin in the Pollok area. The crash happened around 2:30 a.m. Tuesday near Farm to Market Road 843, near the Lufkin State Supported Living Center. According to the preliminary crash report from the Department of Public Safety, an 18-wheeler towing two trailers was traveling northbound on Highway 69 when the driver swerved to avoid a deer, causing the Saia semi-truck to overturn and spill an undetermined amount of diesel on the roadway. State troopers said the driver, who was from Louisiana, was not injured.

TRAFFIC ALERT: SB lanes of Hwy 69 have been re-opened near the Lufkin State Supported Living Center in the Pollok area, following an 18-wheeler crash w/ diesel spill. One NB outside lane remains closed. Central ISD traffic entering the high school should not be affected. 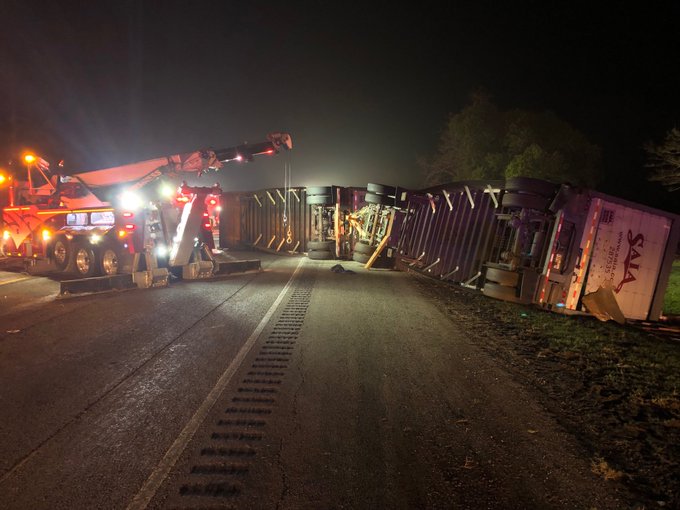 A hazmat crew is working to clear the scene, according to the Texas Department of Transportation.The outside northbound lane remains closed as of 6:45 a.m., while other lanes have reopened. Traffic entering the Central Independent School District school zone should not be affected, a TxDOT spokesperson said.Motorists should reduce speed and prepare for delays until the scene is cleared.